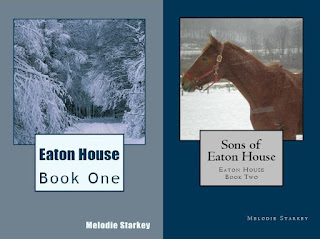 I was very happy to know that Sons of Eaton House (Book Two of the Eaton House) series was ready for Kindle. I have read two other Melodie Starkey books (see links to my reviews below) and know that her stories both inform and entertain. Book Two followed in suit, touching on many sensitive issues with delicate skill.

This is the continuation of a family narrative that was begun in Book One, but a reader need not have read the first to understand and enjoy the second (though the first is well worth pursuing and will make some of the events involving the parents easier to understand.) In Book Two, the children are coming of age, and each of their distinct personalities are evident and well developed. There are two sets of twins who are distinctly different and yet similar in values ... a younger child who is the only girl in the family ... an oldest son who carries the oldest son's family name and sense of responsibility, a grandfather who adores all seven of his grandchildren, an infant son (who will no doubt grow into the story in Book Three) and another child is now entering the family, at the age of sixteen. This foster child, as all those who preceded him, has a very troubled past, through which Starkey is able to delve into issues such as the poor state of orphanages in the late fifties/early sixties, the abusive treatment some experienced, and the callous shuffling out of the older children from overcrowded asylums. Yet this author shows him being cared for by long-distance truck drivers and migrant (sixties-hippies) farm workers who show him both physical and emotional compassion.

The contrast between the hazardous backgrounds of children who are fortuitously brought into the Eaton Family's House and the loving, compassionate, healthy environment they find themselves in at times brought tears to my eyes. The sensitive way Starkey introduces minor characters in the story who as adults are also living difficult lives but have room in their hearts and homes for this orphan before he is found and placed with the Eatons is also a credit to her writing abilities.

This story brings the children to the point of adulthood before ending suddenly, leaving the reader to want to read even more of this extraordinary family story. The parents of the children are also still growing, both within their marriage, and as adults themselves struggling with boundaries and wishes. This is a story that moves through decades of time, and the reader must stay grounded in the ever changing era, just as the characters had to learn to do.

So once again, I look forward to the next book in the saga. I'm definitely a fan!

Posted by Quilters' Quarters at 8:48 PM