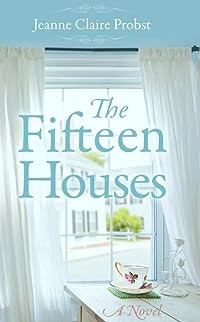 The Fifteen Houses
by Jeanneclaire Probst


I met a new author at the New England Authors Expo at the end of July. Jeanneclaire Probst is one of the many authors exhibiting books at the Danversport Yacht Club, hosted by Chris Obert of Pear Tree Publishing. Jeanneclaire was there to introduce her debut novel, The Fifteen Houses.

Jeanne grew up in western Massachusetts in the same years that I grew up in South Boston. Though our settings were vastly different, we were both children during the fifties, and teens during the sixties. The story told in Probst's novel is fiction, but resonates with many readers who shared those childhood years.

Jeanne tells the story of Julianne, a young girl with sisters and brothers, parents and step-parents, happiness and tragedy, strength and trauma. The family described in this book are living in denial of their reality: secrets are to be kept within the household and not shared with the community. Julianne is a child living in a confusing adult world; she attends a primary school in Massachusetts where lessons are taught in French. When her family makes one of their many moves to a neighborhood of English-speaking families, she must begin to learn to read in a second language. She also has a hearing deficit, and is fitted with a strange appliance for most children: a hearing aide that draws negative attention rather than sympathy from her fellow students. Learning is hampered by this impairment, and punishment for being less than perfect is swift and physical.

Through the many moves, from one house to the next to the next, the family profile emerges as one less typical than many in the "Happy Days" decade of the fifties. Wife-swapping, parental discipline, school discipline, social situations ... some things change suddenly with each move, and yet other things remain painfully the same.

This story is the beginning of a series. Probst has several appearances scheduled to give her the opportunity to share her character's story and life lessons with many audiences. You can read about her local appearances in Massachusetts at her Amazon Author Central page

When interviewed on a local cable television episode, she hints that there are eight or more books ahead in this family saga, each one focusing on one of the main characters in the family of Julianne. It promises to be a series that captures American life in the second half of the twentieth century ... my century. Read along with me!  Five stars for this debut novel, and for all that it promises to reveal in later books.
Posted by Quilters' Quarters at 9:59 PM No comments: