A Peaceful Walk Along the Beach 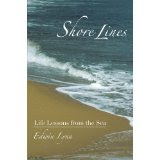 Shore Lines: Life Lessons from the Sea is written by a man who has spent many fruitful days experiencing the ocean shore. Both on the sand and on a sailboat with a friend, Reverend Edwin Lynn has opened his heart and his mind to the sea, and feels a sense of home each time he visits. He and his wife have lived in many parts of the United States, but they feel most at home when they are near the shore of their ocean, the Atlantic.

And when Lynn visits the ocean, he studies its lines ... the wave patterns left on the firm wet sand at the water's edge, and the flora and fauna left behind the receding waters. He is often able to equate these parallels to life, and could then share his insights and thoughts with others as talks with members of his Universal Unitarian church in a large town in Massachusetts.

Once trained as an architect before becoming a minister, Reverend Lynn looks carefully at the structures of life, and the repeating patterns of mathematics in nature ... and takes and shares the knowledge and balance that comes with such understanding. His book chapters, stories and anecdotes all deliver lessons gently. And as he was once also a teacher in a school of spiritual learning, he has divided his book into three equal sections: Attitude, Adversity, and Gratitude.  Those who have read his chapters recognize within his own style that of Anne Morrow Lindberg's similar appreciation and understanding of what the sea has to offer us.

One publisher who enjoyed his writing referred to this as "A quiet book," one that made a stronger impression on those who also knew and valued the lessons available to us at the ocean's shore. But whether you live along the coast or have only read of it's powerful setting, this book has something to offer every reader, of every age, in every setting. It offers you a moment of contemplation in a hurried and noisy world. Five stars for Edwin Lynn's Shore Lines. I continue to enjoy it in small sections, lingering and savoring each morsel of life shared in each moment that I sit with his stories.

Murder for a Worthy Cause, by Neal Sanders 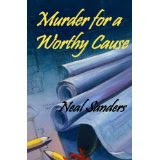 Neal Sanders' Murder for a Worthy Cause is the sequel to A Murder in the Garden Club, and his characters are welcomed back by readers who have recognized this author's talent in telling the tale of a small town murder. Detective John Flynn, his recently-humbled and amiable Chief Harding, and Flynn's new friend and resident of Hardington, Liz, are again faced with an unexpected murder, the second in two months in this small town that prides itself with its tranquil reputation and setting.

That suburban setting is presently drastically altered by the arrival of a film crew determined to fulfill the promise of building a beautiful new home for a family displaced by a fire. "The Ultimate House  Makeover" host and  crew arrives with trailers and trucks and tents and supplies, and hundreds of locals have volunteered to help in this worthy cause ... and optimistically to be filmed while doing so. Drawn to the charisma of the televised program's handsome host, Whit, even the members of the Garden Club are enlisted to plant the landscape once the pre-ordered plants arrive. But to the chagrin of the Garden Club President, Liz, they have been ordered by Californians from a landscaper in Texas and are not fit for the Zone 5 climate of Massachusetts.

In this way, the author, Neal Sanders, displays his careful research and consultation with the experts who advise him toward writing knowledgeably the back stories of his novels. Coordinating investigation resources of local manpower, State Police, and his friends in the Boston Police Department and other Suffolk County offices, Sanders' Detective Flynn does manage to solve this mysterious murder within the allotted time of five days ... the same days in which the former home of the Cordoza family will be replaced.

Unfortunately for the one-week intensely-scheduled and volunteer-labor-dependent crew, it is the coordinator of the local volunteers who has been murdered, and the build must go on. Liz,  having seen the planting disaster ahead and coming to the site to argue with the staffer responsible, is the first person with organizational and leadership skills to arrive on the scene. She is hastily recruited to replace the deceased selectman, and she takes on his role of fitting volunteers and their recorded skills to the many jobs waiting to be done. Liz new 'job' involves meeting the daily requests of the site managers by reading through the pages of names and matching the volunteers' skills to the chores, sending teenage "runners" out with the lists to the groups of workers and their managers.

One of these 'runners' reminds Liz of her own daughter as a teenager, and the two build a hasty relationship and mutual admiration. This established rapport enables the teen to eventually entrust Liz with a secret, and that secret leads to the discovery of another secret, and that to a possible clue to the murder's solution.

Other characters from A Murder in the Garden Club reappear in this story: the Patriot's football star and his wife, who emerges as more than just a pretty face, and the lawyer-turned-friend who can advise Liz on staying within the bounds of Massachusetts Laws. The young police officer, Frankel, again measures up to Detective Flynn's trust and out-does the State Police in crime scene observation, while Liz's old friend Roland reappears to comfort Liz as she confesses  her unhappiness in living alone with her daughter married and living more independently while Liz's husband continues to live apart during the work week, coming home only for brief weekends.

All of these characters continue to grow in their relationships and their common dedication to the town of Hardington. Neal Sanders has a viable cast of characters and a realistic setting in which to pose mysteries worth solving, and gentle lessons of humanity worth sharing.

This is the second book for which Neal Sanders has chosen the artwork of a local Georgetown, Massachusetts Artist, Lynne Schulte, for the cover of his book. Her artwork can be scene at her website, www.lynneschulte.com, and her beautiful detail and style add a local flavor and comfortable dimension to Sanders' stories.

Five Stars again for this second mystery set in the fictional town of Hardington, Massachusetts! Scroll down a few entries here to read my review of Sanders earlier book, Murder in the Garden Club

Posted by Quilters' Quarters at 9:33 PM No comments: