I've been reading, and it's now time again to review the best of those I've enjoyed in this miserably hot and humid August.  My Kindle has been a blessing as I've spent many days this summer sitting in a doctor's office awaiting treatment. Rick is always at my side, and we've had many conversations during the ride to the city. But in the waiting rooms we both read. So here's what I have for you today.

Every Wife Has A Story 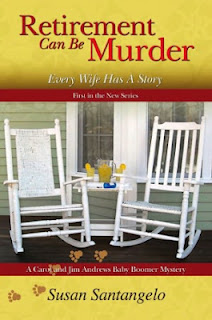 Susan Santangelo has begun a series of 'baby boomer' books, following Jim and Carol through a series of events that many in this age group are experiencing, or soon approaching.  The subtitle for each book is "Every wife has a story," and the point of view in the books is that of Carol Anderson, who is a wife, freelance writer, mother of two, good friend and devoted companion to two English Springer Spaniels, with whom she shares many conversations. Carol's husband is employed in public relations in New York City, and they share a lovely home in a Connecticut suburb just a commuter train track away. Their son Mike is a well educated individual living on his own, and their daughter Jenny has just returned home, leaving a controlling boyfriend on the west coast to continue working instead on her graduate degree. 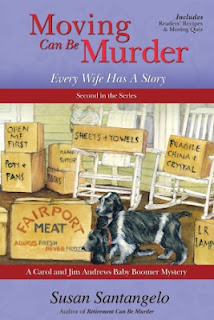 In the first book of the series, titled Retirement Can Be Murder, Jim is considering retirement, and Carol is fretting what may signal the impending loss of her alone time at home. Believing that Jim will need the structure and responsibilities of a retirement hobby or avocation, she uses the internet to look into possibilities. But what she finds leads both Jim and Carol into frightening consequences...

The second book, titled Moving Can Be Murder, finds Jim and Carol facing the reality of mortality, and the recognition that living in an old house requires a great deal of maintenance. While they have addressed such problems through the years, Jim's financial awareness and tight purse strings have always been appeased by his willingness to do much of the work himself. But he is older now, and health is at the forefront, right there next to saving money on a tight budget. Carol begins researching condominiums and 'active adult lifestyle' communities. Jim unexpectedly takes the lead in finding such a setting, and encourages Carol to consider it seriously.

Leaving her home is an unsettling proposal for Carol, but leaving their dogs is unthinkable, for both Carol and Jim. They continue looking. They list their own home for sale with Carol's competent realtor-friend, Nancy. But when the first sale falls through due to an unexpected death, things take an unusual twist, involving many more people than would be involved in a typical home sale, as their home is now to be  offered as a 'show home' to benefit "Sally's Place," a charity that supports victims of domestic abuse. Little does she know that her once-intimidating teacher, a nun with a firm standard and glare to match, is in charge of Sally's Place.

Susan Santangelo weaves the two stories together skillfully, and in the second book, introduces her readers to not only the world of maturing baby boomers, but also the world of realty and of domestic violence, and to the realization that there is much more to retirement than just finding a hobby to fill the hours.   Five stars for both of these books; I am looking forward to the third book, due soon. Both of these are available for kindle and for nook and other e-readers, as well as in paperback.

Posted by Quilters' Quarters at 2:27 PM No comments: