Paul Janson's new book, Mal Practice, his first novel, introduces a protagonist about whom readers will no doubt want to read more. Joe Nelson, a coal miner turned pediatrician (the hard way, with years of study and family encouragement)has a calm, easy-going personality, a beautiful, equally-talented wife (also an emergency room doctor)and a practice in the small town he wants to serve ... the small town where he grew up ... the small town where almost everyone is related to almost everyone, and secrets kept are deep.

Dr. Nelson is accused of malpractice, The local police and local lawyers and local court and local jury are all looking into his life, his possible ineptitude and his character. With everything on the table and little else to lose, Joe begins his own investigation into the death of his patient, as Joe alone knows of his own innocence.

Joe's ongoing romantic involvement with his soon to be ex-wife puzzles some and intrigues the reader. Other characters develop as Joe's investigation begins; some are those who stand to lose both money and credibility should his investigating expose their motives, and some are those who see and appreciate Joe's capacity for putting the puzzle pieces together. Joe himself is then a target for those might have a motive and a means of having killed his young patient three years ago, and a recipient of benevolent assets and support from those who want him to succeed in exposing the guilty.

Family, relationships, community, enmity, greed and murder are all key elements of this engaging novel. Just enough medical detail is shared to keep the reader grounded in the story. I strongly recommend it to all readers of mysteries, and all readers of medical murder. And it is my fervent wish, as a reader, to know more of what will happen in the lives of these main characters. I see series potential.

Posted by Quilters' Quarters at 5:02 PM No comments: 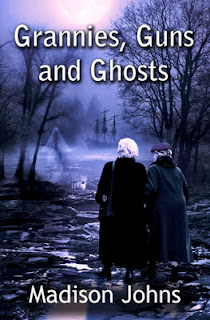 Madison Johns has done it again, capturing the human side of elders by writing of their reactions, intuitions and observations at crime scenes that seem to pop up wherever they might be.

In Grannies, Guns and Ghosts, Aggie and Eleanor have been enlisted by a frightened local who witnessed a death ... was it a murder? Or a suicide? Or the gentle push of a ghostly apparition?

Coinciding with this death is the appearance of a ghostly ship seen by some on Lake Huron. The ancestral home of the deceased is also the site of family burials ... and wives and husbands appear to have died in tandem, generation by generation. Curiouser and curiouser, the two fearless detectives work around the local law enforcement personnel to discover more clues and avoid their own vulnerability and arrest.

Gypsies, Ghosts, Old Flames, Pink Guns, Snarky Adolescence, Threatened Curses, Locked Gates and Slippery Cemetery Lawns all pose challenges for our heroines; they stumble and bend their way through them all, to an ending that ties in the paranormal events in such a way as to leave the reader questioning ... and of course, wanting more of Aggie and El's adventures.

Five stars for the sequel that doesn't fall short of expectations. If you haven't read the first tale, Armed and Outrageous, you've missed out on some sizzling relationships!

Posted by Quilters' Quarters at 3:03 PM No comments: 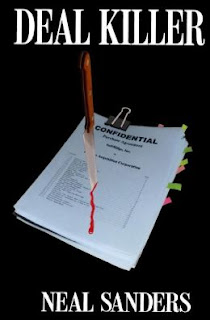 Neal Sanders is an author whose mystery books not only pose a puzzle, but offer an insider's view of ordinary worlds not always known to all ordinary people. His earlier murder mysteries enticed readers to reflect on the many facets of running a gardening club, involving social/economic changes in small towns, and personal interactions between generations.

Deal Killer invites us into the executive boardrooms of competing industrial plants, introducing us to a host of characters ranging from 'woodchucks' (or 'go-fers' in other arenas) to CEOs (chief executive officers)and bank accountants, project managers, Boston Irish Mobsters to, to New Hampshire state troopers (in a different light than in his Hardington stories.) His settings range from the woods of New Hampshire to large chain hotels in the small city of Nashua, to the famous Boston Fanueil Hall Marketplace and to the back rooms of a bar in South Boston.

What is not different from his earlier works is his ability to build strong characters with deceptive ease, allowing his readers to understand each player's individual motivations and values. By using interactions and conversations between his people to show the power plays behind the scenes, the complexity of what may be seen by the uninvolved public as a simple transfer of ownership, and the stakes involved in personal investment of loyalty, commitment and dedication to an employer's goals and dreams, Sanders educates us and entertains us without distracting us from the hanging question of 'who dun-it' as the chapters unfold.

With a strong female protagonist cast in a mousy persona and secondary seat at the table, to the deceptively benign posture of the head of a corporation ... and in a beautiful blonde's predictable guile balanced by her focused intelligence and resourcefulness, Sanders quietly establishes the truth about not judging people by their outward appearances, their occupational identities, or their public facades.

After reading this story, it's unlikely that one would ever look again at a corporate buy-out story in a newspaper as "just business." The threads of this story are as seamlessly, purposely woven as the most obscure pattern in a story of old... a story that concludes with the right thing being accomplished by just the right person, for the right people.

Posted by Quilters' Quarters at 9:20 PM No comments: