Beneath the Tor by Kat Yares 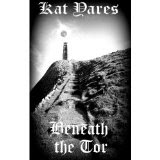 Kat Yares' novel, Beneath the Tor, is a compelling retelling of the beginnings of Christianity. Her inclusive version recalls many well-known names from the New Testament, adding depth to each one's personality and destiny. She begins the tale at the Isle of Avalon, with the Lady of the Lake, her younger sister, and other priestesses who worship the Goddess as the one true deity. Miriam is an old woman talking to a young woman from the island, having asked her to transcribe her narrative for future generations.

Miriam's life changes dramatically when her father arrives from Jerusalem to reclaim her as his daughter and brings her to live as a hidden servant in his home. Miriam's life-long friend has convinced her father to bring her and keep her until they can be married three years hence. This young priestess of Avalon is scorned as being one from 'the fairies' and is soon in need of a sanctuary, which she finds in a temple of the Goddess Isis.

Her story includes Joseph of Arimathea as her father and his hostile wife and sons, as well as Peter, Paul (Saul), Judas, Barabbas, John, Mary, Joseph, and more. The settings of the story logically include early Rome, Jerusalem, Egypt, Britain, Nazareth and India, and the transports of two thousand years ago: large and small ships, carts, and litters. Household implements such as stones used for grinding wheat to flour, wooden goblets and plates, and pallets for sleep are easily worked into Yares' story.

The roles of men and women are in sharp contrast between the Isle of Avalon and 'the world,' and Miriam learns to adjust as needed to each, for the sake of her children and husband, Jesus (named Yahshua in the story.)

This version from the other side of the lake does change outcomes, character development and history as we've been told; it raises within the reader a sense of possibility. What if it happened this way, and the truth was hidden by those who assumed power through the ages?

The ultimate question left unanswered is when the story hidden beneath the Tor of Avalon will be found; the prophecy is that it will be discovered when the time is right. How might it impact the distribution of power and influence in the world?

This story leaves a great deal to the imagination, and to the aspirations of many women. Well done, Kat Yares!
Posted by Quilters' Quarters at 1:43 PM