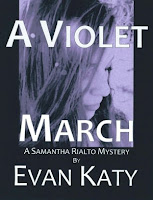 Evan Katy has added her third book to the Sam Rialto Mysteries. A Violet March picks up where Sam was left following the destruction of her home in February.  She is sharing temporary rental space with her life-long best friend Maxie and with Olivia, the sister of Sam's current paramour, Ben.

Sam's role as the middle school's music teacher is more the basis of the plot than in the previous two books of this series. Sam's student, Violet, comes to her for help; Violet's father is missing and the police seem to have given up their search. Violet is convinced that he can be found, and believes that Sam is the one to find him.

But Sam instead turns to Skipper, a private detective with whom she has worked in the past. Skipper's strategies and tactics are at times on the edge of the norm, but he does have a good track record in finding people, and in getting to the root of a story.

When Sam, Katie and Olivia find a dead body in their potential rental house, the story gets more complicated. Ben, formerly a local police officer and now a federal agent,becomes involved in the investigation of the death. Sam's abusive ex-husband (and Ben's former partner and now nemesis) is also in this story, as he is living with Skipper's fishing shack manager, Birdie. This mix of characters encounters many hazardous situations involving the missing parent, as well as his two ex-wives and two unknown (to Violet) sons.

Evan Katy continues to write mysteries that are wrapped in webs of comedy and drama. This one includes an abandoned home called "The Convent" (for ironic reason.) Thugs, gangsters, stun guns, pepper spray and real weapons are all a part of this story. A character familiar to readers is unexpectedly killed toward the end of the book, leaving Sam bereft and unsure of what is to come in her future.

This series and the main character Sam continue to hold my attention; I give this one five stars as well. To read the reviews of Evan Katy's earlier Sam Rialto Mysteries, click the links below:

Terry's review of January Kills Me

Terry's review A Bomb in February

Posted by Quilters' Quarters at 11:24 AM