Back to the Books! 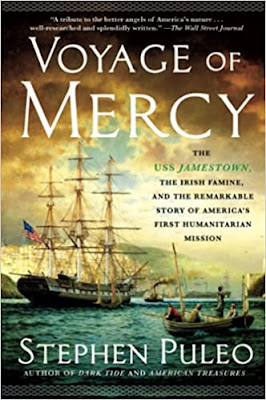 Stephen Puleo is a Boston-based author whose books have been celebrated in many local school districts and 'town-wide' reads for several years now. He has been a guest author at our local library, and will be returning this Spring to talk about his latest historical piece, VOYAGE OF MERCY.

This book tells the story of the compassionate response of the United States to the great famine in Ireland mid-nineteenth century. As with all his books, Puleo tells the story from the individuals' point of view ... the ship captain who talked the government into freeing ships from war duty (the Mexican War) to  a humanitarian purpose ... the Irish priest who visited and provided as best he could for his sick parishioners, bringing food and warmth and faith door to door at his own expense ... the British leaders who struggled with balancing the great need of the Irish,their own consciences and the public will of their consituents ... and the host cities on the east coast of North America who received, with varying sentiments, the starving ill immigrants who flooded their streets.

As Dickens might have observed once again, it was "the best of times, the worst of times." People on this side of the ocean reaching out to help those 'across the pond' who needed both food and encouragement. People on that side of the ocean willing to see the beggars flee their continent to come to ours. It is a story of humanity ... the good and the bad ... the rich and the poor and the middle folk trying to make the best of what could be.

Stephen Puleo's writings never fail to inspire the best in us, and acknowledge the weaknesses that accompany humanity. Once again, I give his writing five stars.

Posted by Quilters' Quarters at 1:43 PM