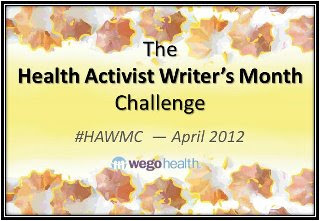 WEGO, a health activist site, is sponsoring a month long challenge for leaders of health care. A quote from their blog reads:" If online health communities are an unruly high school, then Health Activists are its dedicated teachers – and WEGO Health is the teacher’s lounge. We help leaders to come together, to learn from each other, and to go back to their classrooms better at their craft."

Their first prompt of the month (no, this is not an April Fool's Day prompt) is to imagine what you might put into a health time capsule to be opened one hundred years from today. To read the full prompt, go to their website. Here is my response to this prompt:

"What do you think it is?"
"I don't know yet ... I can't get it open, it's covered in tape. It must have been up here in the rafters of this old barn for decades."
"Maybe it's a deed ... or a certificate of stock ... maybe it's something really valuable! Hurry up, open it!"
"Let me get one of those old tools we saw below, the one with the plastic handle and the flat end on the rod..."


The two brothers jumped down the short distance from the attic of their great-grandfather's barn. The tool they found was encrusted in rust and of no use to them, so they took they small packet into the house, where they placed it on the chopping block table. Reaching for a pair of zip scissors, they sliced off a sixteenth of an inch from one edge, and reached inside. The page inside was neatly creased and fell into two sections when unfolded.


"It's a letter, dated 2012, and signed by our great great great grandmother! Remember the story of the package of pages tied in ribbons that our great grandmother found about fifty years ago, the one that told all about life at the turn of the millennium? She gave it to the historical society when she found it. Dad told me that his grandmother wanted people to know what life was like for women born in the twentieth century. The pages were all about school-teaching, and learning to use primitive technology by typing on a keyboard ..."


"Read it! Why did she leave this note out in the barn? Why wasn't it with the rest of the pages? Is it really from her? Is it really a hundred years old? How old was she when she wrote it?"


"Give me a minute ... this one is hand-written, in the old style, with the loopy letters, and the ink is fading. Here's what I think it says:"


For whoever finds this note, please excuse the handwriting. My eyesight is worsening and the tremors in my hands are increasing, but I wanted to write this with liquid ink, so that it wouldn't fade away as print might.

They tell me I have multiple sclerosis. I don't really believe them, for no one in my family, for generations past, has ever been labeled such. My father, his brother, and his mother all had Parkinson's Disease, and they showed the same symptoms that I have. But the doctors who diagnosed me disregard that history, for doctors in the past hadn't the modern technology of magnetic resonance imaging that we have. The clunking, banging, noisy scans reveal innumerable lesions on my brain, and on my spine. And the lumbar puncture, the long needle poked into my spinal cord, revealed bands in my spinal fluid, and that too is said to be an indicator of MS.

My first neurologist insisted on ruling everything else out, and said that I didn't have  PD because my arms did not jerk when he rotated my elbow. He prescribed what was thought to be important: a disease modifying drug that I would have to inject with a syringe every night, rotating among seven different areas of my body that had adequate layers of fat beneath the skin. Just the thought of that annoyed me, but he said that it would possibly delay the progression of multiple sclerosis' nerve degeneration by about a third. Small promise, I thought. But I went along with his prescription.

For almost five years I and my husband patiently, carefully, scheduled and rotated the injections, which always burned for twenty minutes afterward. But when I began to read about differences of opinion regarding the cause of this so-far incurable disease, and read that some disagreed that it was an immune disorder, seeing it rather as a metabolic disorder, I knew that my choice at diagnosis to change my eating style was a good decision, and was probably enough. No meat, no dairy products other than yogurt, nothing fried ... I'd lost a good deal of weight that first year, and hadn't had a relapse since diagnosis.

Oh, I'd had symptoms, but they were never called relapses. In my late fifties, a cataract could be causing the blurred vision. Weakness and vertigo in the hot humid summer was attributed to the weather, as it could be easily remedied by moving into a cooler space. Depression, anxiety and fear, loss of the ability to learn new things by reading, and forgetting my students' names were all attributed to life stresses. I had to leave my beloved classroom, and retire a few years earlier than planned.

When that happened to me, I made my decision to discontinue the injections, and soon felt more like myself. My energy increased, my ability to read and write improved, and without the stress of the classroom and with antidepressant medication, I began to take an interest in life again. It was too late to save my teaching career, and my ability to remember new things was never going to return to what it had been when I could learn one hundred new student names and profiles every year, but I could begin a new career.

And that is why I'm writing today. I want to tell my children's children, and their grandchildren's grandchildren, to listen to their inner selves. I want to show them that taking care of their metabolism is important. I want them to know that eating a menu of vegetables, beans, seeds, and berries is a healthy choice. I want them to recognize that when a medication with slim promises doesn't help and causes more issues than existed before it is okay to tell a doctor 'No thank you.'

I suppose in a few more decades, or half a century ahead, or in the next century itself, all of this will seem primitive and ridiculous. When we look back at how illness was treated a century ago, in 1912, when people with Parkinson's Disease or assumed Multiple Sclerosis were told simply to go home and rest, limiting their strength by inactivity, we shake our heads and say they ought to have known better.

Perhaps my descendents will look upon today's medical advancements as short-sighted. Maybe the nutritional aspects of disease symptoms will be looked at first in the next century. We look back today at the twentieth century's widespread use of pesticides and herbicides and shake our heads, realizing the damage they have caused to ourselves and to our gene pools.

At any rate, whoever is reading this: you have the opportunity and responsibility to live a healthier lifestyle. We began to make  forward steps at the beginning of this twenty-first century. We recognized the faults of the earlier generations, and did our best to avoid the known carcinogens in our environments and in our lifestyle choices.

Know that I love you, and want the best for you. It is up to you to seek it out.
Terry Crawford Palardy


PS: I asked my husband to tuck this note into the rafters of the barn because, as anyone alive today knows, the barns are often kept in better shape than the houses, for it is the barns that allow a space to earn a living.

"Wow. It really is her note. She could be standing right here, talking to us."
"What are we going to do with this? Give it to the historical society? They can add it to the database and store it away with her other writings."
" I guess so. I don't know, it seems like something we ought to share with someone ... but who?"

Posted by Quilters' Quarters at 11:59 AM