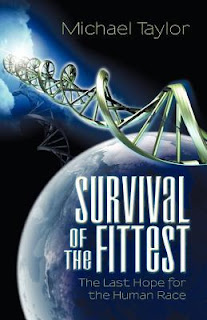 Survival of the Fittest: The Last Hope for the Human Race  by Michael Taylor


Recommended for: all readers aged 13 and up
Read from March 28 to April 12, 2012, read count: 2
Survival of the Fittest blends the elements of science fiction with a story line that looks at parent/child relationships, and world powers collaborating in the face of alien attack, and teen issues and roles complicated by the unsettling rules of engagement.

Anyone who has watched young teenagers become totally involved in video games and then instantly disengaged to take a phone call or a family conversation will appreciate their ability to detach and adjust to the unexpected. Teachers see this flexibility every day, as their students move from history content to chemistry to physical education and then to art or music ... the adult world expects that this generation will adapt to the new technologies ... never stopping to think that innovations today happen exponentially faster, and are a world apart from the changes we witnessed in the twentieth century.

Michael Taylor writes with the sensitivity of adults who spend their working lives guiding adolescents through the myriad changes life presents to them. His depiction of adults, those manipulating and those manipulated, is blunt, painfully so.

The story ends with the unknown ... it has a bit of a coming of age feel to it, and the characters themselves are faced with the choice of what will happen in their foreseeable future. This is a fascinating story, raising ethical questions and moral dilemmas for all who will read it.

I would recommend this book to all who are invested in the healthy development of adolescents, and perhaps to those media pundits who delight in running headline stories of negative events in teens' lives. Someone once said, "Love ... is not always what it seems." 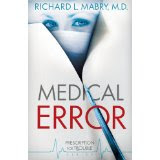 This was a mystery that, due to life's complexity, I read in many interrupted sessions. But the story held together so well that I never lost track of who was who, what happened when, or how many clues had been presented.

Characters were very well developed, very consistent in the points of view, and easily recognizable in dialogue. Doctors, police officers, federal agents, health workers, ambulance attendants, and bad guys were all easily recognizable and true to the reader's perception of their roles.

I won't summarize the plot here, as many others have already done that, but I will say that even though I'd missed the first story in this trilogy this is a stand-alone success. I look forward to reading the other two.

Posted by Quilters' Quarters at 5:21 PM