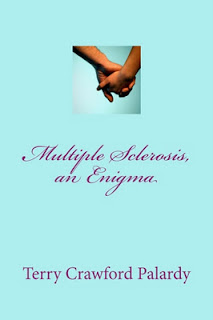 Generating coupon code for Multiple Sclerosis, an Enigma http://www.smashwords.com/books/view/152332
Your coupon code for FREE is CJ23V
The print version remains discounted at Create Space: here is the information you'll need for that:
https://www.createspace.com/3711313
and enter this discount code at the checkout: VXXURQMH
Please consider writing a review at Smashwords, Amazon, Goodreads or in an email to me - I would love to post the reviews here for others to read. 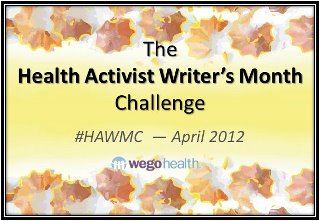 Today's Health Awareness writing prompt is: open a book, see a phrase, and write about it for 15 minutes.
I opened a book by Robert Fulgham, found on my daughter's bookshelf. The phrase I read is:"... it can always be worse than the list"
Of course, my first thought is, what list? But that would take me away from the intent of the prompt. So instead, I will write about a list that I have been following all week while staying at her house.
It's a list of morning chores:  after getting the kids' morning needs met so that they are ready on time for the high school bus, there are the animals to care for: not many, but their needs are very different.
The dog has an egg beat into his morning dry food, so his bowl must first be washed. As his water bowl has to be filled anyway, I wash that, too. I stir his egg in his empty bowl, then add a scoop of dog food, then stir it into the egg. He sits patiently at my feet as I do this. I wash his water bowl then, and half fill it, and put both bowls on the floor. If there are leftovers of the kids' toast or bagels (not usually) I'll add that to his food, too.
Then the fish - there are only two, and they don't need much. A small pinch of flaked fish food and a small pinch of freeze-dried blood worms (which don't look like worms at all.) Then top off the water in their tank, and watch them find the food. The sucker fish actually turns on his back and skims along just underneath the surface of the water, scooping up the flakes that are floating there, as though he were cleaning them from the sides of the tank. And the small black shark with the pointed nose and two tiny whiskers darts around the tanks foliage, snatching for the blood worms, and rejecting the flakes. To each his own.
Last on the pet list is the family's bird, a cockatiel (I may have that name wrong) who greets me each morning when I remove his cage cover with a seductive whistle. I remove, wash and refill his water, and then dump the remainders of his seeds (mostly empty husks) and fill it with new seed. If I remember, I'll give him a slice of peeled apple, or a bit of fresh lettuce. He talks in chirps to me as I'm doing it, interspersing his language with whistles he has learned. I've taught him to imitate the sound of a cardinal, and he does that quite well. He somewhere learned how to imitate a donkey, and a chirp that sounds very much like 'hurry up,' which gets me moving or calls me back to finish whatever I'd forgotten. And yes, I have to agree with Robert Fulgham: it could always be worst than the list: it could be many more animals, with pens that need to be cleaned out. Or it could be many more animals and not enough food to share. It can always be worse.
The animals have been wonderful company with me this week - the dog curls up in bed at night with me, the bird greets me flirtatiously each morning, and the fish are mesmerizing to watch as they share the tank gracefully. When the kids come home from school, there are more lists of reminders, but they, too, are enjoyable and loving.
Life could certainly be worse than it is! I've had a wonderful two weeks with them all.

Posted by Quilters' Quarters at 11:46 AM