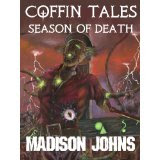 In the first tale, two boys are wandering around their town, looking for the scariest Halloween carved pumpkins. They have done this for a few  years now, and both admit that they will eventually go out to the feared Johnson farm, where rumor has it that four young children disappeared there fifty years ago.

They encounter old Mr. Johnson on his monthly shopping trip into town, and watch as he buys large quantities of seed corn. They are intrigued and then horrified when they follow and watch what his purpose is.

Who has the scariest Halloween decorations?
Halloween night, while trying to resist going, they know that they will find the scariest pumpkins out there at the farmhouse, and their goal is to photograph those. After some deliberation, they agree to go to see what horrible Jack O'Lanterns may have been carved this year.

They approach the house, and are invited in for cider and donuts...

The second short story is a legend of Hell Crow, involving Hitchcock-like crows that descend on a small town at harvest time in every year that sees a second full moon that month. Fifteen years have passed since the last arrival of the dreaded Hell Crow, and a young girl, who lost her grandfather to the crows' attacks, is now searching for her grandmother, who has gone missing.

She intends to build a scarecrow to ward off the crows in the abundant fields of corn ... a tradition her family has always observed. She debates whether to continue looking, asking townspeople and friends to help search, or to build the scarecrow first, before the sun sets.

But she finds the town has turned against her, and seems to know something she doesn't. She returns to build the scarecrow herself ... and a stranger comes along and offers to help her place the creation in the fields, asking only one thing in return for the help...

This is a book to read on a dark night, with the wind howling and the tree branches swaying. Whether it is in the fall during harvest, or in the darkness of winter, or a stormy summer evening, it is not a book to read while you are alone!

Remember, if you are looking for the February Birthday Discount on Multiple Sclerosis an Enigma, visit Create Space and enter this discount code ND67VUCJ to receive 50% off.

Posted by Quilters' Quarters at 12:48 PM