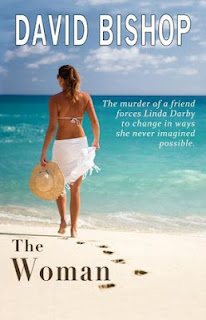 David Bishop's mystery The Woman is much more than a clever detective story could be. Bishop has written a story that tells another story: he writes of today's world, its political corruption, personal greed, and efficient killings.

The story begins with Linda, a divorced thirty something woman who is savvy enough in day trading to have amassed enough wealth to live comfortably on her own in a seaside condo. Linda has a good friend in town, with whom she shares long weekend walks and a weekly luncheon date in a cozy restaurant. Cynthia has become more of a mother figure in Linda's life, and when she is found savagely tortured and murdered, Linda's tranquil life takes a sharp turn.

What might have been a simple "Who done it?" becomes an entangled, widening web of intrigue, unanswered questions, economic and political discourse, and altered identities. Linda is not the shy retiring lone runner the reader first assumes early in the story. She evolves, out of necessity, into a clever, bold, courageous woman who follows out her dead friend's instructions to begin a new life.

There are men in Linda's life: the shy waiter with a sketchy gang-related background whose life is saved by Linda's generous blood transfusion; two muggers who attempt to kidnap her but are thwarted by a third, mysterious stranger; the town's chief of police who is tall and handsome but perhaps dangerous, according to the stranger's words; an assassin sent to eliminate Linda, and two more thugs who follow her on her escape race across several states.

David Bishop describes the scenes of the story in realistic detail ... the craggy stone cliff at the shore that Linda climbs, the highways and byways she encounters on her race through California, Oregon, Washington State, Nevada and Arizona to safety, the glitz and glamour of Las Vegas, the barren landscape of unoccupied territories, the gated gardens surrounding a wealthy home in Washington DC and the small seaside town of her post-divorce retreat. His descriptions of the people are clear but not drawn out, and each one becomes real to the reader in short order.

The book has the potential for a character series, or at minimum a sequel. But life is not a tidy package with finite edges and endings, and neither are Bishop's books.

Posted by Quilters' Quarters at 5:16 PM