What About My Books?

Looking back over the list of posts that I've offered here, I can see many authors' books; posting their reviews, I can remember each one of them fondly. I haven't posted reviews of books that were poorly written, or pointless ... I've only read a few like that, and moved on.

I've shared some reviews of Multiple Sclerosis, an Enigma, as that is the most recent work I've published. But there are five others, each one totally different, and worth space in this blog. So I'll start today by featuring one of them ~ the first one I put together.

Put together? Yes, for the composition was already completed years ago. This book, titled Teaching: Education and Academics at the Turn of the Century, is a compilation of the columns I'd written for the Phi Kappa Phi Forum. Before it was titled that, the magazine was called National Forum ... but during my term of writing, the publication went international. I was very excited to be writing about American Education and to know that people in other countries might be reading my words, reviewing my thoughts, and hearing my voice.

These columns came to be because of a letter I sent to the president of the Phi Kappa Phi Honor Society, down in Louisiana. I complimented him on his new position and on the material offered in the quarterly journal. As the society itself does, the magazine features many different disciplines. I also made a point of telling him that all of the Education and Academics Columns were written by writers who worked at the secondary or post-secondary level of education. I asked him to consider featuring some K-12 articles, as many of his members, like myself, had majored in that academic area. I told him that our voice, too, would be enriching to the magazine.

And so, in his presidential wisdom, he turned my question back toward me, and asked whether I would consider applying for the position of the Education and Academic Columnist, as they would be looking for new writers for the next three-year term. I said I would, and sent a few sample articles that I'd written. I then let my husband, Rick, know that if someone from Louisiana called and asked for me, it would not necessarily be someone selling something, and that I'd want to talk to them.  (Rick usually answers the phone, and quietly hangs up when telemarketers reveal themselves by mispronouncing our name.) Phi Kappa Phi called, and Rick did answer and took the message, and gave it to me. I called back and accepted the position.

Pretty black and white, right? But the call came while I was on my way to visit my mum in the skilled nursing center for what turned out to be the last time. When I came home from that visit, Rick gave me the message, and I felt empowered, and capable of writing something worth publishing. It was early August, and we were on school vacation. I sat right down at the computer and drafted the first column. I then wrote and mailed notes to both my principal and my superintendent, advising them that I'd be writing for the Forum, and that this was a big step for me as a writer. I knew they would be pleased.

The next day, after stopping by the post office to send my notes to the principal and superintendent,  I was on my way again to the nursing home when my pager beeped. We didn't have cell phones in those days, but Rick and Rob and I had beepers, and had set up a coded system of messages. 111 was the code for an emergency involving my mother. 222 was the code for an emergency involving my dad, 333 was for Rob, 444 was for Rick's mother, and so on. The message I was receiving on the beeper read 111. When I got to the nursing home a few minutes later, I learned that Mum had passed.away.  I stayed with her for awhile, and then my sister and father arrived, and we all said some prayers at her bedside.

I went home and wrote her obituary. When I reached to the printer to take it out of the tray, it was sitting on top of the draft of my first column. What a whirlwind of emotion those two pieces of paper elicited. I never had a chance to tell her that I would be writing for a scholarly journal. I'm not sure how she would have felt about that news. 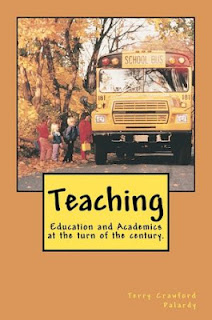 I worked on that column, and on a second column, and took both into school with me that fall. I asked friends to help me choose which one to submit for the spring journal. I did use that second column later in the year for the fall issue. I continued to write for the journal for the next few years; I told my editor once that each time I faced a deadline for an article, it seemed that something difficult was happening in my life. The deadline, and the writing, proved to be a welcome distraction from all that I was facing at home: more elders' illness, more school challenges, and more emotion.

And so my first column was born. I titled it "Classroom Shadows."  It is a series of brief descriptions of the students in my classroom ~ or in any classroom ~ the students and the issues that surround them, as shadows do. It is a plea for the adults in their lives to work together, with the goal of making education a better experience for their students. And it is an acknowledgement that none of us are alone in this life: our shadows are always with us.

You are invited to read this collection of columns, written during a time of great change not only in my life, but in schools in general: the early years of education reform, round three. These columns linked together paint a very clear picture of public schools at the end of the twentieth century. I'm proud to look back on them, grateful to remember the reading and editing that the journal provided to me, and satisfied that they portray accurately changes that were happening as I wrote. They are 'in the moment' pieces, not affected by faulty memory, or shaded viewpoints. They are real. They are true. They are worth the binding provided. They are a part of our history. So many voices today comment that things have changed in education. This book honors those changes, and the people who remained and thrived despite them, or because of them.

You can find this book at Amazon, in both print and kindle format.

My next column will look more deeply at the content of this first book. 'Til then, be well.

Posted by Quilters' Quarters at 2:57 PM