Reading and Reviewing: Armed and Outrageous by Madison Johns and The Crystal Needle by Daniel Peyton 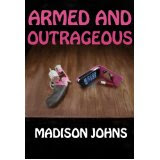 It was my privilege to proofread this book before publication.
Armed and Outrageous is a funny, warm, charming story of two mature women who have experienced life's losses but have come out stronger and wiser. Madison Johns has captured their enthusiasm, their confidence, their courage and their friendship, telling a good story while bringing the reader into the world of today's 'spunky seniors.'

Young women are disappearing from this small town in Michigan. The residents don't want to believe that anything serious links these disappearances ... just as they didn't want to pursue finding the killer responsible for a crime decades old. But Agnes and Eleanor have a personal interest in finding out what is going on, as Agnes' granddaughter is one of the missing girls.

With humor and bravado they persist in asking pesky questions. They learn to fire pistols after an unintended shot wounds one of the newcomers in town. Their exchanges with the local sheriff and the state police vary widely, ranging from scorn to hilarious scenes.

Madison Johns weaves romance sensitively into the story, allowing her senior characters to express their romantic interests realistically. The younger generation of local teenagers in entry level jobs is portrayed as being uninformed and disrespectful of the human side of elders. And the vulnerabilities of the families of those missing are gently exposed.

If you want a chuckle, a mystery, a beautiful, serene setting with a vicious criminal being pursued by incompetent local police and these ladies, you will love this book, and no doubt look for more from these characters and their creator, Madison Johns.  Another Five Star Review! 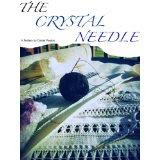 The Crystal Needle by Daniel Peyton is a delightful mix of American history, Japanese lore, stitchery, witchery, and fantasy. It is also a sensitive story of a young man who finds himself reluctantly relocated to a small New England town where his parents are opening a Bed and Breakfast. Having graduated from high school in another state, he is starting a new chapter in his life, in a new setting, providing new relationships and new insights into his own desires.

Joseph finds his first friend in an elderly neighbor, Elsebeth, a woman who shares his enjoyment of stitchery. She in turn shares her friendship with a young woman who also stitches, and Joseph is 'smitten' by Allison's gentle mannerisms and beautiful eyes. He realizes that Allison's deformities, though evident and mysterious, are not relevant to his relationship with her. He looks retrospectively at his earlier friendships and relationships, with their typical age-appropriate superficiality; he realizes why they remained only at a surface level, while this one is growing into a more mature, caring, lasting one.

Daniel Peyton has cleverly woven character development, coming of age, realistic history and fantastical mystery into a beautifully designed tapestry of good versus evil. So many themes present and are developed in this deceptively simple tale. Readers will come to understand each character and will no doubt want to learn more of their unique relationships and stories.

I give this five stars, and recommend it to readers who want to learn a bit more of needlework and love.
Posted by Quilters' Quarters at 6:05 PM