Here are two more summer reading mysteries that will hold your attention when it is too hot to do anything but read, read, read! 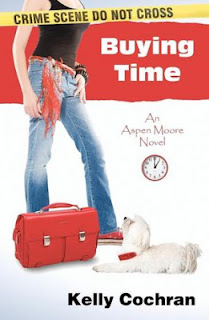 Kelly Cochran takes us into the world of a woman who is just finding her way in a new setting. Having lost her fiance, witnessed his murder, and testified against the criminals who killed him, she is now in the witnesss protection program.

Amber, formerly Amelia, has left her family, her friends, her professional career, her possessions and her success to start over miles away from her home. She has to begin establishing new goals and dreams. Her new choice of career is as a personal concierge, running errands for people who don't have enough time to do their own. She has one pair of dress shoes from her former life, but now spends most days in her favorite red sneakers, and her snappy blue jeep.

She is always aware of the need to stay under the radar, to keep her new identity hidden. But she finds ways to keep in touch with her mother without being tracked by "the bad guys." She has made a few new friends and is beginning to establish a manageable routine -- until things start going wrong

A client is dead. Another is robbed and assaulted. Her own apartment is ransacked. A dog she is responsible for feeding and walking is suddenly dog-napped.The post office front window is shot in as she is inside picking up a client's mail. She receives an unexpected gift, finds a note inside, jumps to a romantic conclusion, goes to a mysteriously arranged rendez-vous, and finds herself in harm's way.

Kelly Cochran keeps the twists and turns intertwined through the story, bringing it to closure only after Amber experiences more danger than she thought would be possible in her new life. This could be the start of a new female-lead detective stories. If there are more ahead, I'll be reading them. Five Stars!

Spell Checked, Book 1 of the No Uncertain Logic Series by C.G. Powell

A trip to Ireland undertaken by two best female friends Gemma and Mae who are suddenly joined on the airplane by a handsome, charming, sophisticated Irishman named Aiden with charisma that attracts both of them is the beginning of this paranormal romance story.

Upon landing, they agree to meet for dinner in Dublin, and he brings a friend, Beck, to the table. The foursome's delightful dinner is suddenly interrupted when the man called Beck is suddenly called away.

As the story unfolds it begins to involve Greek mythology, ancient history, and warlocks, vampires and witches. Science fiction enters the story line when the history of witches and vampires is told to Mae and Gemma. Having always been interested in the paranormal, they accept the stories and the realization that one of them is, in fact, a witch.

I will leave it to you to read the story, to learn who is what and to whom each one 'belongs.'  The story does have some editorial issues that might be cleared up with another thorough proofreading. But those issues do not detract from the overall plot line.

This is not a book I would recommend to readers younger than 18, for there is a fair amount of physical intimacy in the story. But college and adult readers will no doubt be intrigued with the history and characterization of such figures as Helen of Troy being depicted as a reincarnation through the ages ... this time being hosted by a witch rather than a vampire's mate.

I'll give this one four stars.

Posted by Quilters' Quarters at 9:16 PM